Is it haunted? I have heard the whispers, the stories. Unlikely, or so I thought. 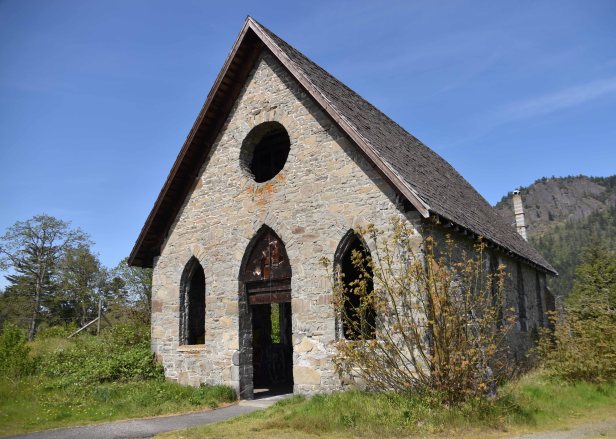 I have read the tales of strange sights and sounds. Visitors, who dare to visit at night, tell of feelings of being watched.  They claim to experience cold spots and many hear eerie sounds from within the building.

The tales reached far and wide. In 1931, Ripley did a story about it in his “Believe it or not” Column. He stated the church was never used because every worker died mysteriously.

We needed to see for ourselves.

I felt a strange sadness as I approached the church. 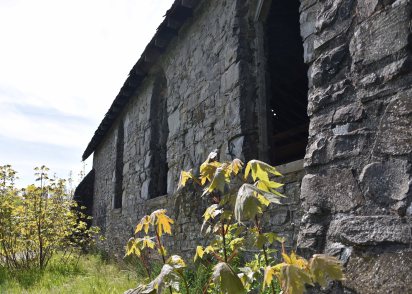 Beautiful stonework, but all the windows are gone. 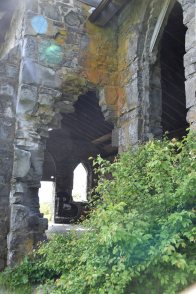 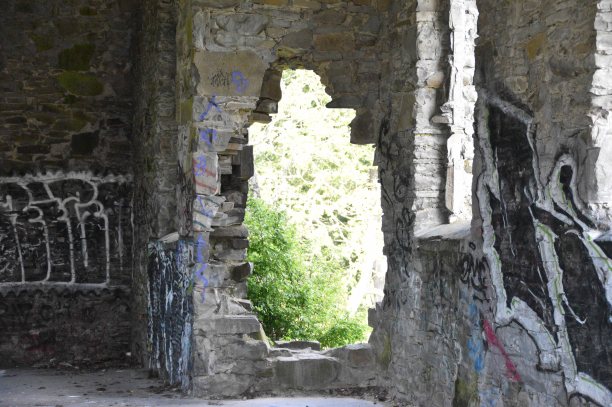 Looking out through the large hole near the front

History tells us that the church was built in 1870 by a missionary priest, Father Rondeault. He paid the workers with the money he earned from selling butter from his dairy herd on a nearby farm. That is why the church became know as the Butter Church. It was in fact used for 10 years, but the Bishop did not like the fact that the church was on “Indian land” so they abandoned it for another location in the valley below.

The church is built on Native land where sacred places are not to be disturbed. Sadly this building has been horribly disturbed, the windows are gone and graffiti covers all the walls. Is that what caused the foreboding feeling, the shivers that crept down my back as I entered? Did the spirits from long ago still reside inside? is that why I was uncomfortable? 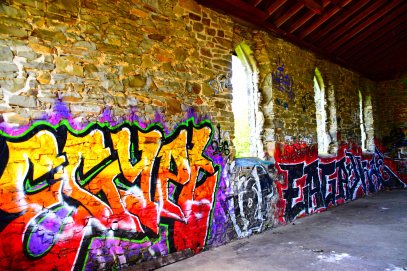 Low Life, a self description of the artist. 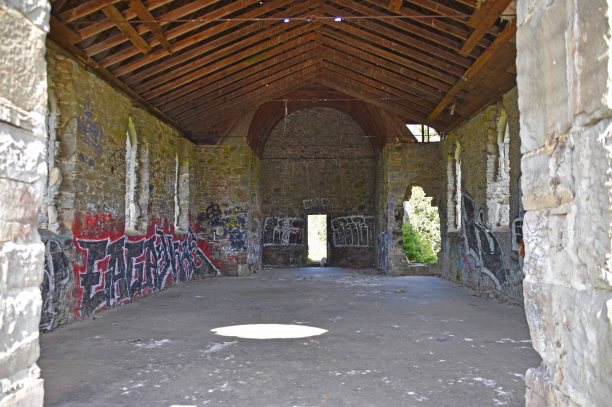 Haunted? Perhaps it is true.

I went back out into the sunshine.  I was greeted by a local man from the Cowichan Native Tribe. We spoke briefly about the church, then he began to tell me a story.

“Many long years ago,” he said “there was a very wicked man who lived near the church. He would rob from his neighbours and cast spells on them, making them very ill. Many died. The villagers got together and decided to do something. They gathered at the church, wanting to kill him. He saw them coming so ran across the valley and up onto the mountain nearby.

The villagers followed him. He stood on the mountain and as they drew closer, he was desperate.  He decided to use his magic to turn himself into a frog. Now he is stuck on the mountain and if you look, you can see him there.  He cries day and night because as a frog, he lost his powers and cannot turn back to a man.”

Can you see the frog? Can you spot the tears under his eyes?

An incredible tale, a modern legend.

One thought on “Is the Butter Church Haunted?”

I would love you to leave a comment... Cancel reply

Follow The Eye of a Thieving Magpie on WordPress.com